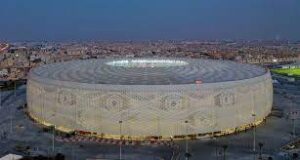 Al Thumama Stadium is one of the newly built stadiums for the 2022 FIFA World Cup and the stadium is named after a native tree found in the region of Qatar.

The stadium is about 7 km south of central Doha and near Hamad International Airport.

Total 8 matches will be played at Al Thumama Stadium which includes 6 group stage matches, one round of 16 match and one Quater-Finals match. The kick-off time for the matches will be as per Arabia Standard Time which is UTC+03:00.